In today’s world, the toughest challenge many face is balancing all the individual things that need to be thought about.

In our time spent working with other equipment managers, it’s something that we hear about often. They all share certain concerns that can extend both on and off the jobsite and have them dealing with various pressures at once.

For one, they’re worried about retaining their most knowledgeable equipment operators and mechanics. They also need to be aware of the latest government regulations so that they know where their operation needs to be changed or improved. Of course, making sure their crew is on track to hit project deadlines is always a concern—and as we all know, keeping their equipment running is a major part of ensuring that goal is met.

An example we can consider is a hydraulic hose that’s failed because of tube erosion. Now, this is caused by a concentrated high-velocity stream of hydraulic oil and small particles in that fluid. And remember: we’re talking about particles that are barely the size of bacteria and blood cells—stuff you wouldn’t ever know was there, much less could see with the naked eye.

But even though they’re microscopic, these particles act like tiny sandblasters right in the core of your hydraulic system.

Now, a lot of equipment managers are thinking the same thing at this point. The hydraulic oil you choose is one of the keys to maximizing your equipment’s operating time.

These specs are indeed critical, but there’s a third specification in that list that can be easily overlooked.

What if your protection is also the problem?

What many don’t realize is that the typical new hydraulic oils they’re purchasing don’t meet the third, most overlooked and most misunderstood OEM specification: cleanliness.

In many cases, even brand-new hydraulic oils simply don’t measure up—they aren’t clean enough. And using these products can actually reduce component life by anywhere from 2 to 4 times. That could end up costing you tens of thousands of dollars a year. 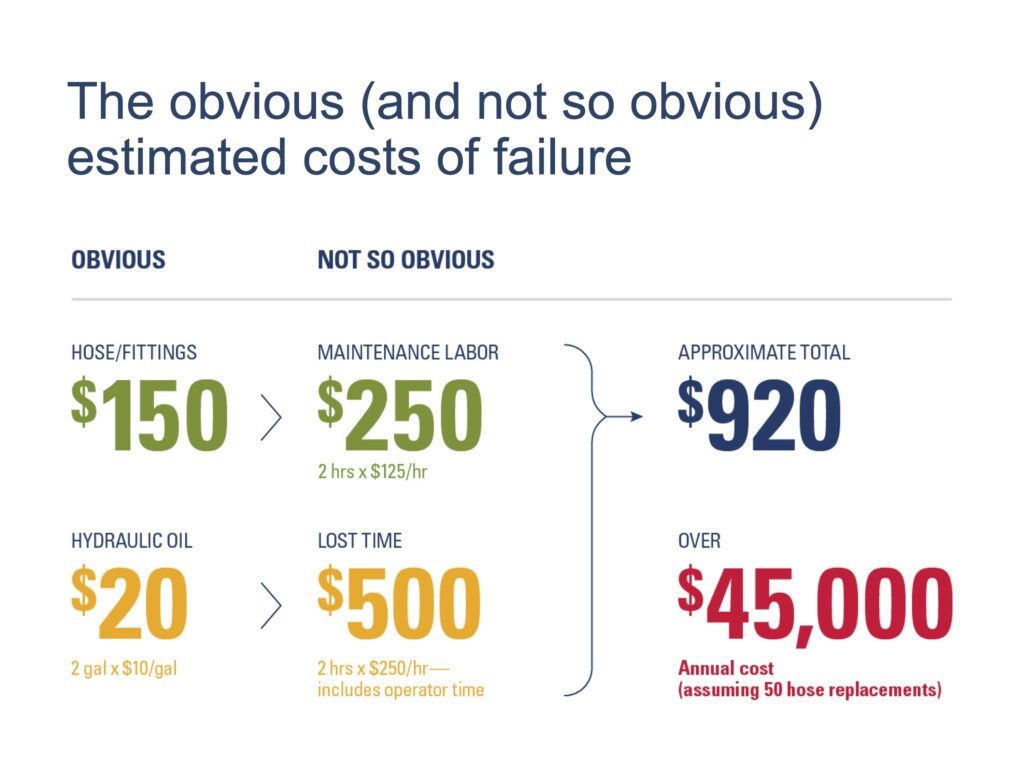 Let’s break down some of those numbers—both the obvious ones that come to mind immediately, and the ones that might not.

The parts themselves can run $150 to replace, and with that come maintenance and labor costs to actually get that job done.

Similarly, a couple gallons of hydraulic oil has a fixed cost you’d expect. But the lost time—including the operator’s time—that’s part of dealing with the situation adds up very quickly too.

In fact, together, these costs amount to more than $900 every time this particular equipment failure occurs. If you replace 50 hoses a year, that cost compounds to over $45,000.

And keep in mind: a hydraulic hose is a simple part of the system. The more complicated the piece of equipment you’re replacing is, the higher that cost will actually be.

The other hidden costs add up too

Let’s think about that for a moment, along with another risk to consider: the risk of further damage in the repair process itself.

Every time a mechanic changes a hose, there’s a risk of additional contamination if the repair is taking place in the field. A hose might be dragged from the truck to the equipment, picking up dirt along the way. Then it’s being cut with a saw, and because they’re working fast the pieces can get everywhere—including in the hose itself.

These mistakes can cause additional leaks and damage to hydraulic components, which are much more expensive to fix than a simple hose.

For example, if a skid steer’s piston hydraulic pumps and motors go, that replacement might look more like $15,000. Every piece of equipment in your operation has dozens of other parts like this that can be at risk—and any one of them could bring the jobsite grinding to a halt.

How would you explain to your owner why the crew’s not working when they’re already behind schedule?

Think of it a different way. What would the conversation with your owner sound like if your crew were behind schedule and sitting around on the site because they’re waiting for a piece of equipment to be fixed?

This is a story that shows you just how critical these issues can become.

This happened on Del. 1 near Middletown,2 where crews worked “feverishly” to make up for lost time on a job and secure the skeleton of a new U.S. 301 flyover to connect with the highway, according to C.R. McLeod, who’s the spokesman for the Delaware Department of Transportation.

They were using a gantry crane to lift the 115-foot-long, 750-ton concrete structure over the highway. And overnight, they had encountered a problem with its hydraulic system.

Now, the southbound lanes on Del. 1 had been scheduled to open at 5am Thursday after closing Wednesday evening. They didn’t actually reopen until 3pm. And the Department of Transportation put out a statement after that saying they had the right to seek damages from the highway contractor Tutor Perini because, as reported in the news, “the advertised end time for the closure was not met and has caused significant delays for motorists this morning.”

If this happened on your biggest job tomorrow, what would the implications be? Can you imagine the impact on your company’s bottom line based on the fines and lawsuits?

Not only would that be an immediate problem, but it could severely impact your company’s ability to win new business going forward.

Start clean and stay clean to keep it running.

So, let’s ask the big question.

How can we reduce equipment failures and the costs and risks associated with unplanned downtime?

For starters, it’s not uncommon for hydraulic hose life to increase 2 to 4 times just by meeting the OEM lubricant cleanliness specifications.

That process starts with equipment managers testing the cleanliness of the oil in all their machines and bulk tanks. Then, they can create a plan and process that will ensure the new oil they’re using meets their OEM’s specific cleanliness spec.

This will help reduce the rate of equipment failures in the field and the unplanned downtime that comes with them.

And that’s where we come in.

This is a comprehensive program that’s tested and backed by Chevron. In fact, it’s the only solution in the market, and it delivers hydraulic oil to meet your targeted ISO Cleanliness levels. This eliminates the need for you to pre-filter new lubricants at your facility, which helps reduce your risk and labor costs.

Companies your size are saving, on average, $66,000 a year on components, reduced downtime, and maintenance and labor. That’s enough to add another piece of equipment to your arsenal.

Ready to get started?

If this sounds like something that makes sense for you, our next step would be an on-site evaluation. By taking a look at your storage facility and reviewing a couple critical pieces of equipment, we can collect samples. Call us to today and schedule a visit.

View all posts by: gaubertoil